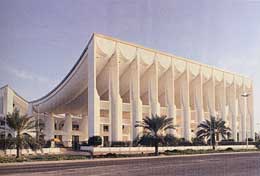 Democratic experience in Kuwait has become more mature, aware and open since the establishment of the parliament in 1963. On October 5, 1992 new elections were held to form the seventh group of representatives who would represent people in the National Council for the seventh legislation chapter. 304 nominators applied for these elections; 50 members were elected by secret direct ballot by 75 thousand voters.

Voting is excluded to Kuwaiti males who are 21 of age. The council nominators must be of Kuwaiti original nationality and not under 30 of age on the election day. Ministers, Justices, Prosecuting Attorneys, Chiefs of Voters register committees or their members may not nominate themselves unless they have already resigned from their jobs prior to election.

The period of the legislation chapter is four years starting from the first session after elections to the last session before new elections. Regular annual session is no less than 8 months provided budget is sanctioned. The council sessions is only valid when more than half of the members are present. Decisions are taken by absolute majority of the present members.