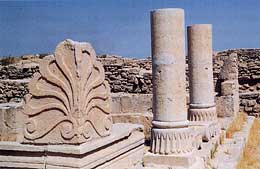 Kuwait, or officially the State of Kuwait, was referred to by the name "Qurain" (or Grane) in the early seventeenth century.
The names "Qurain" or Kuwait are diminutive of the Arabic words Qarn and Kout. Qarn is a high hill and Kout is a fortress. In the dialect of southern Iraq and the neighboring countries, Kout means a house built in the form of a fortress adjacent to water. The plural of Kout is Akwat, as used by the Arabian Peninsula's historians when they referred to a number of castles in towns with forts and walls.
Some historians believe that Barrak, Sheikh of the Bani Khalid tribe, built "Kuwait" in "Grane" and that since then the city has been mostly referred to by the name "Kuwait".
This agrees with the local traditional story that Sheikh Barrak Iban Ghurair Al-Hamid, who ruled the bani Khalid tribe from 1669 to 1682, built Kuwait before the beginning of the eighteenth century (AD)/the twelfth century (AH).

The Danish traveller C. Neibuhr depicted Kuwait as Grane on his map and in the narrative about his voyage made in 1765. Kuwait was known by the name Grane under the rule of Sheikh Abdallah Bin Sabah, the second ruler of Kuwait (1762-1812). Several places in southern Kuwait still bear the name Grane (Qurain).