"Kuwait is a fully independent Arab State with a democratic style of government, where sovereignty rests with the nation, which is the source of power." As prescribed by the constitution, the system of government is based on the separation of powers, although co-operation is required by the Constitution. The legislative authority is vested in the Amir and the national Assembly, while executive power is vested exclusively in the Amir and his Cabinet and Ministers.

The Constitution of the State of Kuwait is composed of 183 articles divided into five chapters:
The State and the System of Government.
The basic components of Kuwait Society.
General rights and duties.
Authorities.
General and provisional statutes. 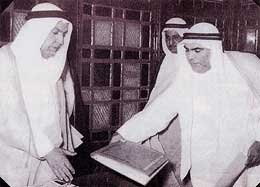 The Constitution of the Senate of Kuwait is based on the democratic principles and combines the positive aspects of both presidential and parliamentary systems prevalent in advanced democratic countries.
The pillars of the Constitution are the sovereignty of the State, public freedom and equality before the law.

Kuwait constitution is a written one legislated by contract. It was laid down by a constituent assembly of 20 members elected by people. 11 ministers were added to them from outside the assembly.
These ministers refrained to vote on the constitution articles while being passed in the constituent assembly as they wished to the elected members alone to do so. Preparation and discussion of the articles of constitution took almost 6 months. On 11/1/1962, the will of Kuwait's Amir, the deceased Sheikh Abdullah Al Salem Al-Sabah, corresponded with that of people's representatives and ratified the draft constitution as the representatives drew it without any amendment to its articles.
The constitution came into force on 29/1/1963 when the first Kuwaiti National Assembly convened.